How To Make It To The Front Page Of Reddit 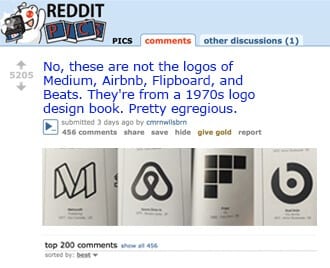 First, a disclosure. I used to work at Reddit, heading up commerce products and business development efforts. Before going to work at Reddit I was a novice user, at best. Like the majority of people who use Reddit, I was (and still am) primarily a viewer/lurker/non-poster. I’d posted a handful of times to no great success. The only post I’d made that had received a bit of traction was to the r/TodayILearned community about how the coming years more diapers will be purchased for the elderly than for the young in Japan. None of my posts (incl. that one) had ever come close to reaching the front page.

For those who may not be familiar, Reddit is an ever-growing collection of topic-based communities. Users create these communities, post to them, and vote and comment on the posts. The highest voted posts appear at the top of the community in which they were posted. If they receive a LOT of upvotes they will end up on the catch-all community (not really a community, more of an index of all the top rated posts across reddit) called r/all (reddit.com/r/all), also known as the front page of Reddit. Getting a post to appear at the top of a popular community, let alone the front page is not easy.

Here’s how I went about doing it.

Votes, made by users are what drive content to the front page of Reddit. Generally speaking, you need (and this is in very rough terms) ~4,000 upvotes in a period of less than 6hrs to make it to the front page. Reddit employs an algorithm to move older posts down (no matter how many votes they get) in order to keep things fresh. The point is, you need to post something that grabs peoples’ (a lot of peoples’) attention enough that they feel compelled to give it an upvote. To put it simply, posts that make it to the front page represent the one-one-hundredth-of-one-percent of content on the internet. The true cream of the crop.

On a Thursday night the other week I was browsing Facebook (which, at least in my case rarely if ever yields anything interesting) and came across the above post from a designer friend in NY. As you can see from his post (above), they are photos from a design book, apparently from the 1980s of logo designs that look STRIKINGLY similar to the logos used by Medium, AirBnB, Flipboard, and Beats By Dre. I had an immediate reaction to it: “Wow! This is amazing! Those companies completely ripped off those logos! And they probably paid some agency to do it without knowing!” etc., etc.

Clearly this was something that needed to be posted to Reddit.

If you post something on Reddit that’s fake (or at least obviously fake) it’s going to get downvoted into oblivion. So, first step, make sure it’s real or very likely real.

Before posting to Reddit I chatted with my friend on Facebook to get a little more background info, specifically what was the book these logos appeared in.  He shared a link to what he said was the book on Amazon. What I neglected to ask him was 1) did HE have a copy of the book and 2) was he the one who took the photos of the logos. It didn’t end up mattering, however and through my own research I would later find that the answer to both of those questions was no, that he (like I was now doing) had lifted the photos and link to the book from someone else (Spencer Chen) who had very likely lifted them from someone else (Stephano Tirloni). In short, I was the fourth person in this chain. 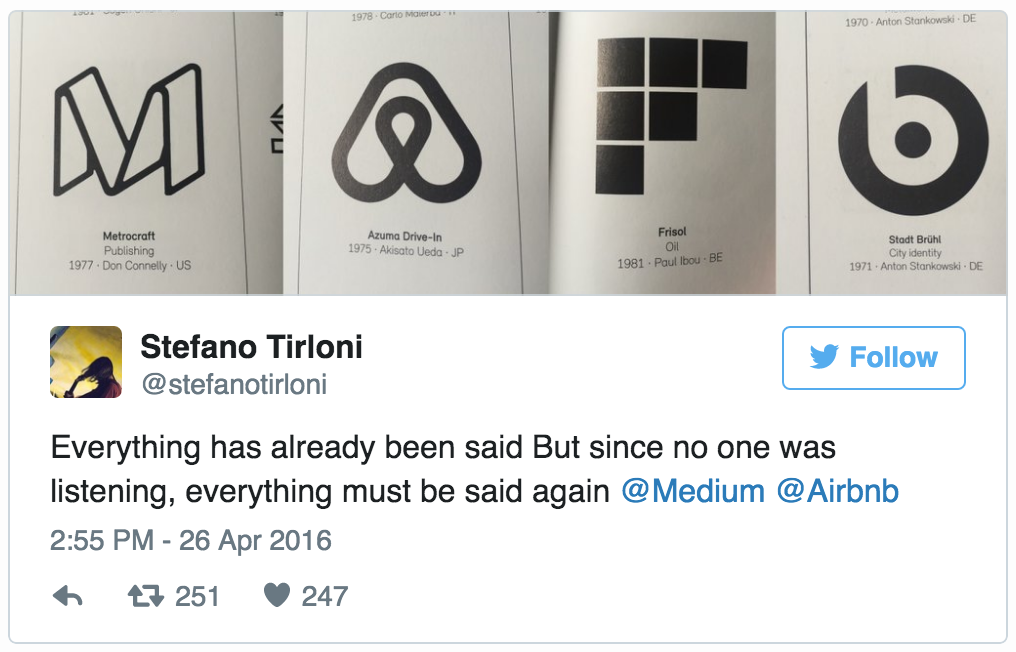 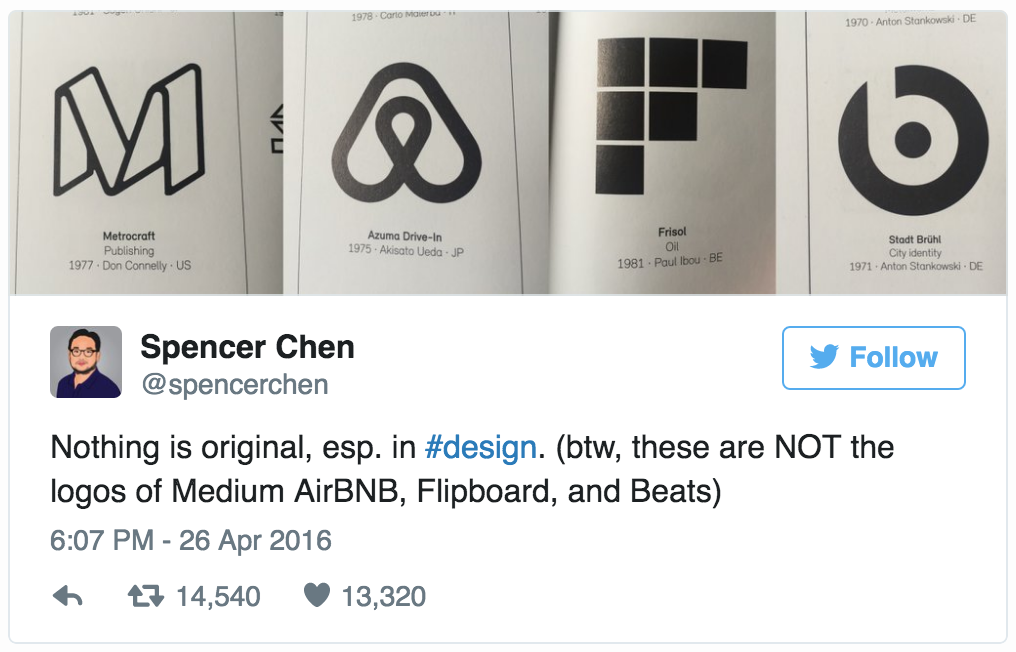 Regardless, knowing who my friend was, having a link to the book the logos supposedly appeared in and having a photo of the logos, I was ready to post to Reddit.

This is another tricky step in the process: you don’t simply post something to Reddit like you would on most any other social network network. Remember I said Reddit was made up of all these user-created communities (over 10,000 active ones)? Well, each one of those communities has posting rules: to succeed you need to 1) post to an appropriate community (e.g., posting a funny cat gif to the r/science community would be a bad idea) and 2) your post needs to conform to that community’s rules/guidelines.

At this point my adrenaline was pumping (“OMG! I’ve got to get this posted before someone else does!”). Not having posted to Reddit in a while, the only community I could think of was r/design. Seemed like a good fit: they have a sizeable number of subscribers (~150,000) and my post mostly fit their guidelines: they say they don’t want anything that’s a screenshot or has text. The photo had a bit of text, but it seemed like a passable infraction. So, laying in bed (at this point it’s around 10pm), using the Alien Blue app on my phone I posted it to r/design.

Step 2.5 – Think about the size of the community and the time you’re posting

In my rush to get my post submitted to r/design, I neglected to think about the fact that it was getting pretty late. Before I turned off my phone (at around 10:30pm) my post had received a couple hundred upvotes, but nothing major. By the time I’d woken up it was at around 700 upvotes and had reached the top position in the r/design community. 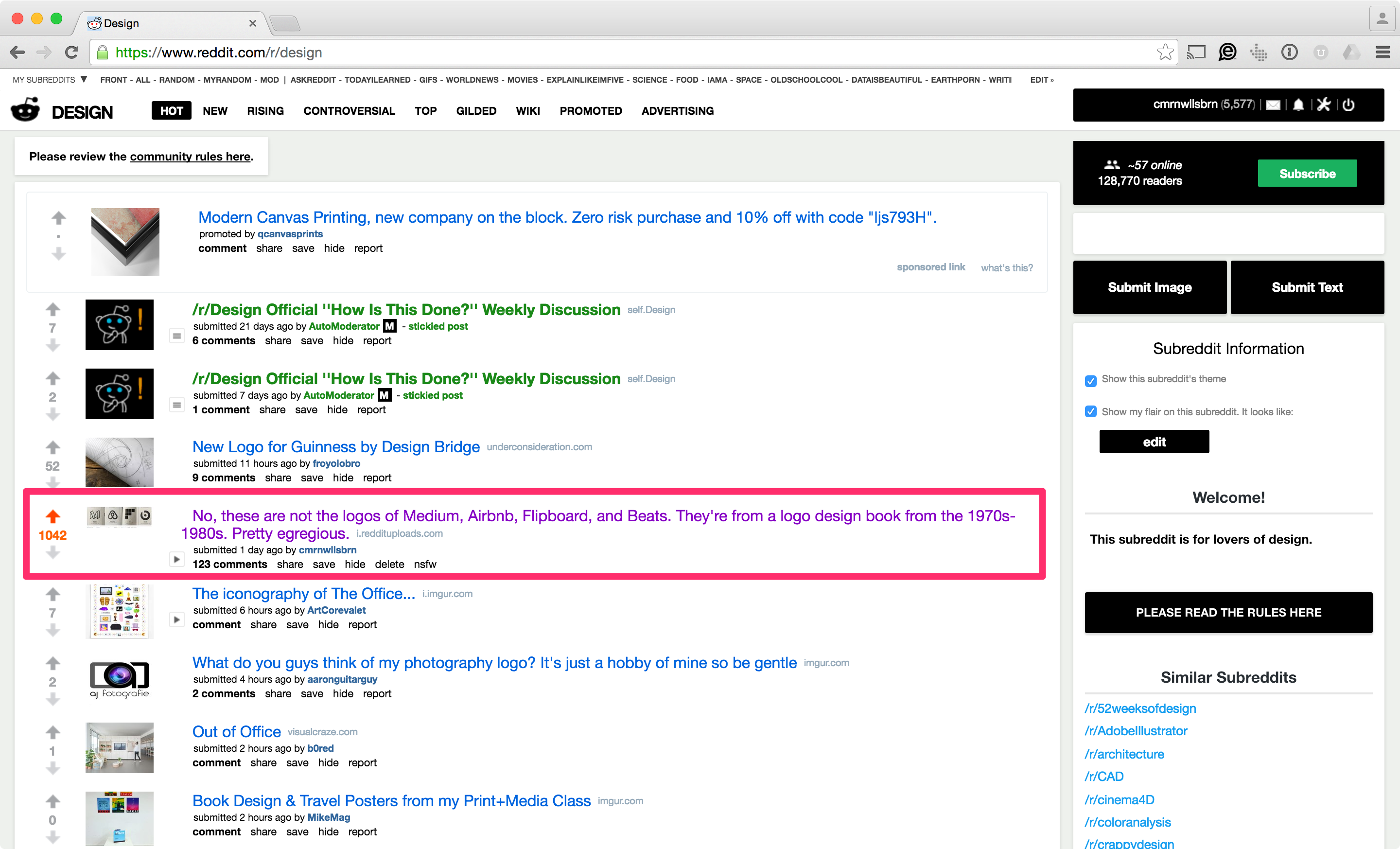 However and since it had already been +10hrs since I had posted, there was no way this was going to get on the front page. Further, it seemed pretty clear that r/design, while appropriate was probably too small of a community to generate the number of upvotes needed to get it to the front page.

Thankfully, another Redditor in our office had a suggestion during lunch: why not repost it to r/pics? Reddit’s r/pics community is one of its largest, with over 11,000,000 members. My post seemed appropriate, fit their guidelines, and it was only 12:30pm MST on a Friday. The conditions were perfect! As soon as we got back from lunch I reposted to r/pics.

Step 4 – Sit back and see how it goes

The post performed very well in r/pics. In total (almost 24 hours later) the post has received over 5,000 upvotes and over 400 comments. By the time I went to sleep (about 9hrs after posting) the post had reached the #43 position on Reddit, on the second page of r/all. Based on its velocity, I estimate it reached the front page around 11:30pm and probably topped out around #28. 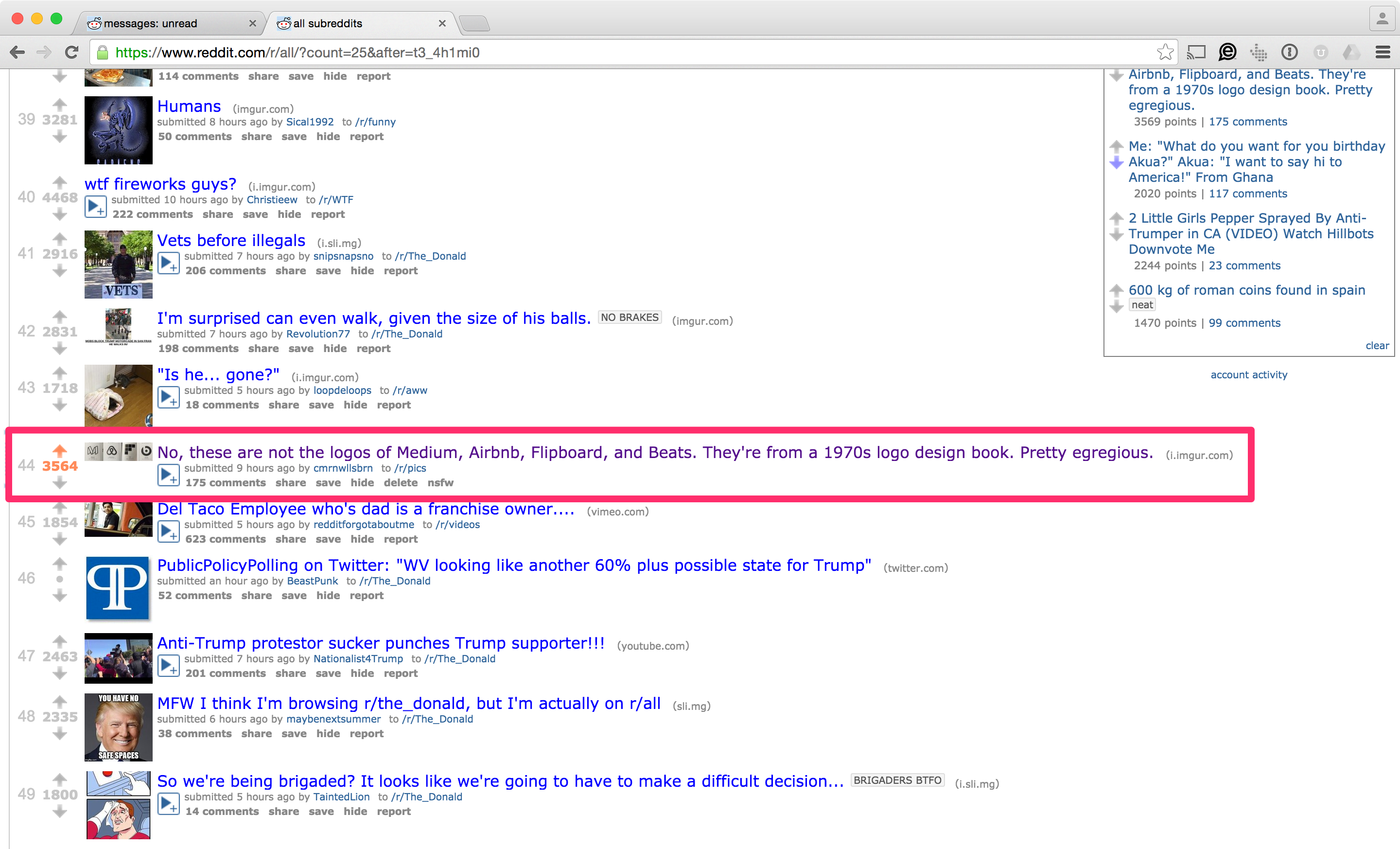 Everything old will one day be new again: Just like the contents of my post, the vast majority of content posted to Reddit (and the Internet at large) isn’t new. Every day Reddit receives over 100,000 unique posts. While a good number of them are original, many are repostings of popular content shared Reddit in months or even years past. Not that that’s a problem: like the Internet, Reddit has so many users (over 250M unique visitors on a monthly basis) that it’s unlikely many people have been exposed to any one piece of content before.

Reddit still doesn’t make much sense for businesses: To be clear, I’m talking about the benefits a business could realize from posting their own content. The reality is that few if any businesses produce content that meets Reddit’s uniqueness/funnyness/etc., threshold. Those that have the greatest chance are probably going to be consumer brands. All I can say is that there are very few cases of companies posting content to Reddit that 1) received a good number of upvotes and 2) sold a lot of product as a result. If you’re a brand looking to engage on Reddit, I would suggest looking at their advertising options and engaging with community members directly, in the comments.

Reddit is a great place to find content: Even if it’s a repost of something that was on Reddit before, virtually all of the posts on Reddit at any given moment are unique – i.e., you’re not going to find the same post showing up over and over again in the same community, or even across multiple communities. This is probably one of the most common misunderstandings of how Reddit differs from from other social networks. If the same post is made more than once to a single community, the reposts will be taken down by the moderators. If you’re looking for content to share on your other social networks (e.g., Twitter, Facebook, Linkedin, etc.), Reddit is a great (possibly the best) source on the internet.

Be sure to spend some time in the comments: Anyone who’s been using Reddit for a while knows the real gold is found in the comments. There’s really no other place on the internet where you’ll find as in-depth a conversation happening around any given piece of content. Even in my post the commenters included a guy who lives in the German town that originally developed the logo now being used by Beats By Dre (see below), links to write ups on how Medium and AirBnB “developed” their logos, etc. At minimum you’re guaranteed to have a good laugh.

Comment from discussion No, these are not the logos of Medium, Airbnb, Flipboard, and Beats. They’re from a 1970s logo design book. Pretty egregious..

Social Media Holidays to Add to Your Content Calendar

Social media holidays are an important part of companies’ social media strategies today. It’s why you’ll see some of the… 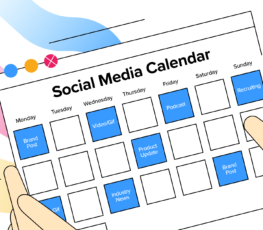 We get it, new software pops up left and right asking you to partner with them. It can be hard… 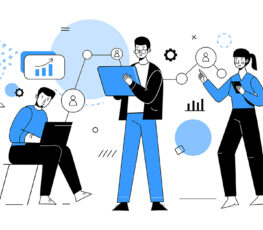 How Marketing Agencies can Fuel ROI with EveryoneSocial

As experts in marketing and advertising, we know the digital universe increases the velocity at which clients expect new ideas,… 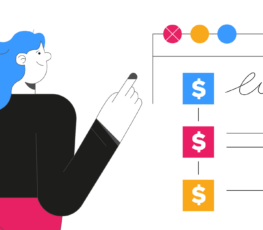